The Holly Theatre is a landmark building located on West Main Street in Dahlonega, Georgia. Its neighbors, the gold-steepled Price Memorial building on the University of North Georgia campus, the old courthouse located at the center of the square, and most of the buildings lining the square, may have been around longer, but the Holly has a rich history packed into less than a century of existence. Breaking ground in March of 1947, the theater’s owner and namesake, Randall Holly Brannon, believed that government enforced construction restrictions would end alongside the month of March. In May, Mr. Brannon was forced to halt construction due to extended restrictions on entertainment construction, but he received approval to complete the project in December. The rapidly growing population of Dahlonega, including that of North Georgia College (now the University of North Georgia), welcomed the grand opening of the Holly Theatre on July 12, 1948, with the show “The Bride Goes Wild”.

Attendance began to drop during the 1960s as local residents welcomed television into their homes. Mr. R.H. Brannon passed away in 1965, but his widow, Mary, along with Mrs. Ash’s protégé, Geraldine Adams, continued to run the theater. With attendance low, Mary Brannon decided to raise the cost of admission to seventy-five cents. Patrons sensed the hardship of the theater with its ailing sound system and the lower quality of movies being shown. During the winter of 1969-1970, the theater closed due to poor attendance. During the 1970s, the Holly saw great effort to keep its doors open. Local resident Bryson Wilkins reached out to Mrs. Brannon to reopen the theater later in 1970, after some much needed remodeling, only to have to close again due to lack of attendance. J.L. Proctor then reopened the theater in 1976, unsuccessfully. In December of 1978, the theater was leased to a man named Wheat, but the roof had begun leaking and was in need of repair. After making the proper repairs, the Holly still experienced a decline in patronage and officially closed its doors in November of 1979. Throughout the 1980s, groups such as fraternities and sororities from the college, and a small church congregation rented the building for particular events. But the deterioration and neglect of the building forced it to be abandoned all together. 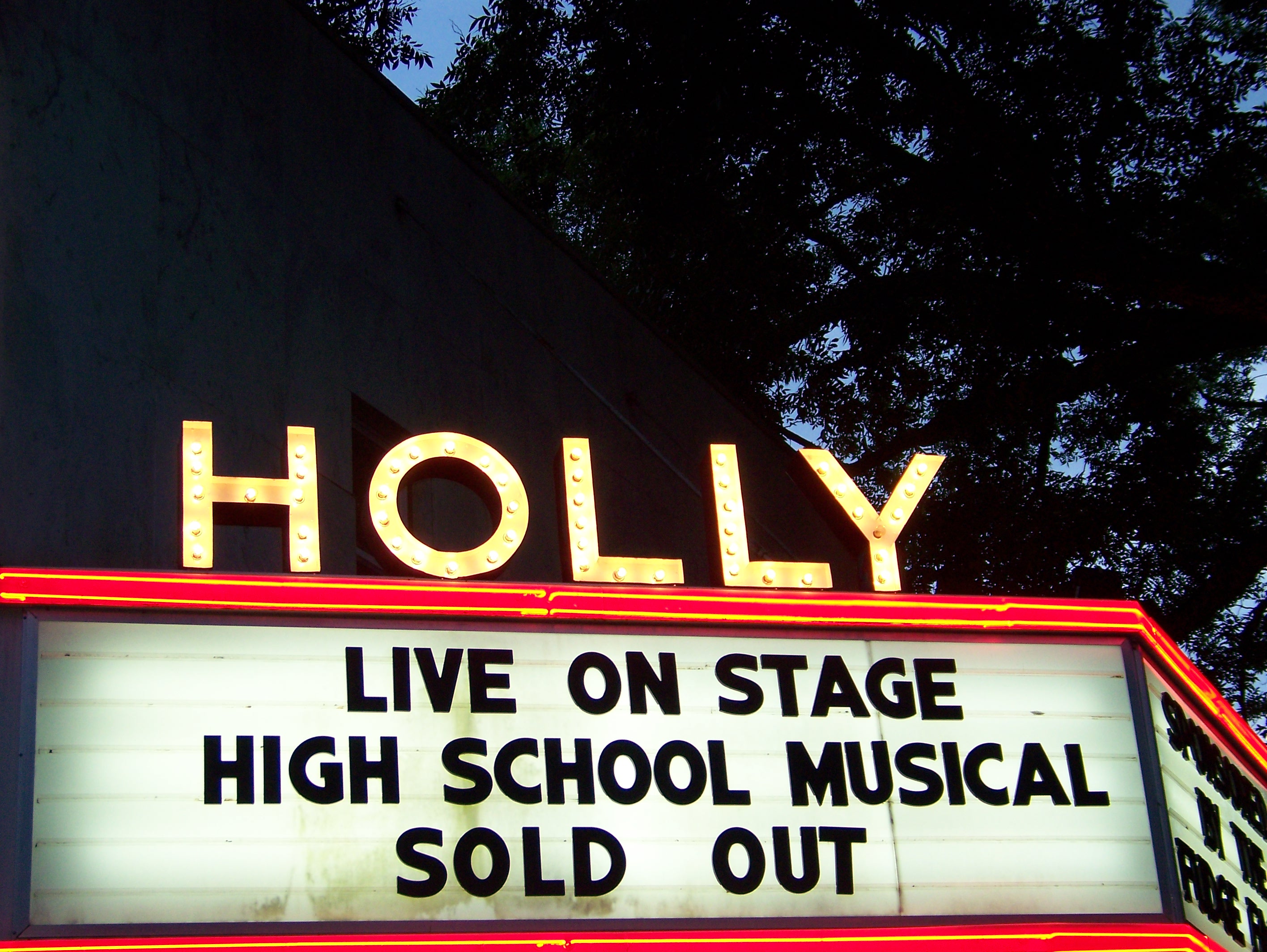 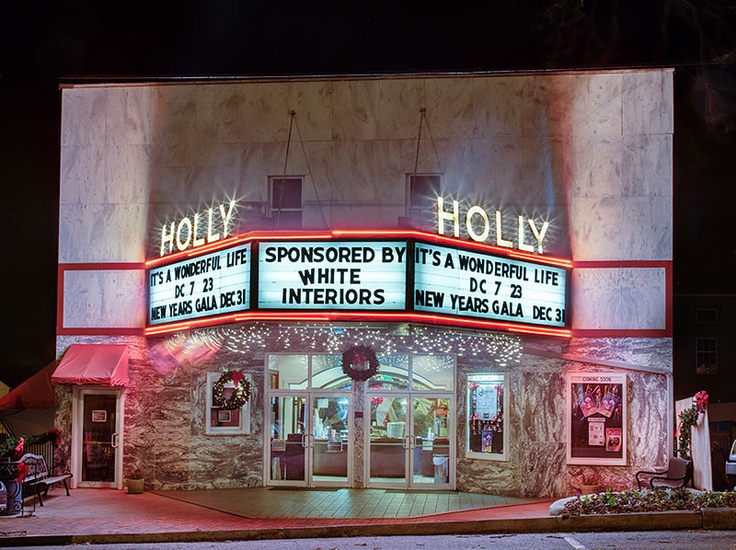 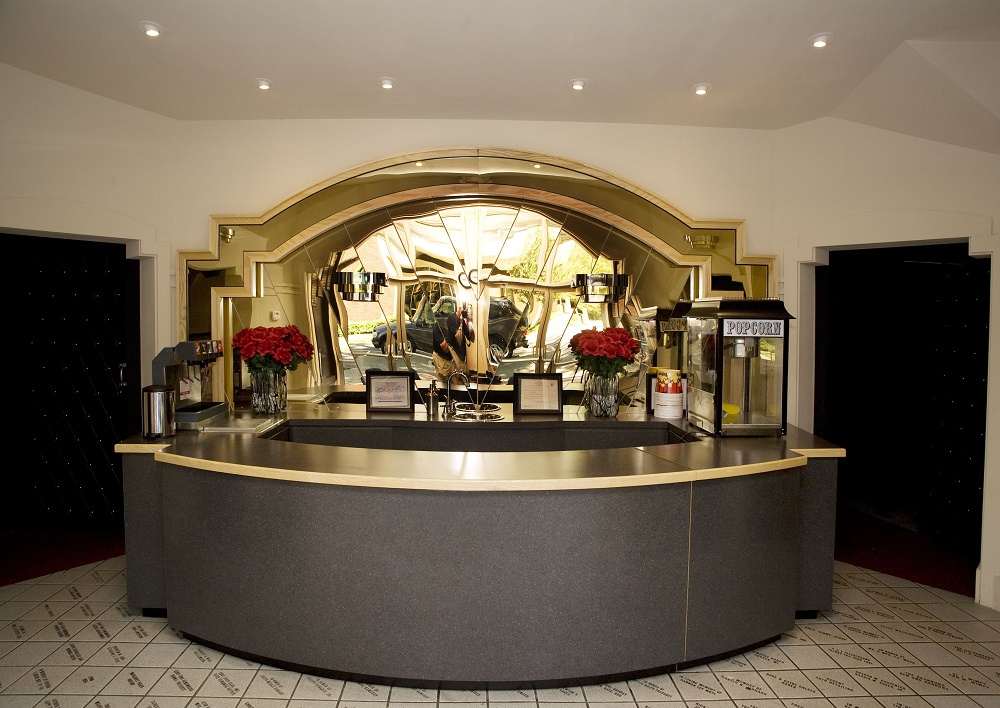 With the front marble façade and marquee breaking off in pieces, the coming and going of pigeons who made a home in the abandoned building, and the choking overgrowth of weeds and vines, the Holly Theatre had become an eye sore in a burgeoning tourist town. In 1990, though, the Holly received recognition for its potential value to the community when Hal Williams started the ball rolling on acquiring the theater and reestablishing it as a functional entertainment space. Many members of the community came together to support the efforts envisioned by Hal and others, and formed the new Holly Theatre Community Center Board of Directors. The board, and particularly its first treasurer, Larry Sorohan, were first tasked with raising $100,000 to buy the building from the Brannon family, then had to ask more from donors in order to begin renovations. Luckily, a negotiation with Mrs. Brannon lowered the initial payment to $10,000, with the remaining $90,000 to be paid over twenty years. The board began their fundraising efforts by reaching out to anyone and everyone in the community with a letter inviting them to become charter members of the Holly Theatre Community Center, their money dedicated to getting the Holly back up and running. Membership ranged from $200-$1,000 plus a commitment to giving $100-$500 a year for the next twenty years. This fundraising effort resulted in 105 members and $33,000 to work with up front. Along with an open loan up to $60,000, the board was well on their way to restoring the Holly Theatre.

Money alone would not salvage the once grand theater. Volunteers worked countless hours gutting the building of its rotted wood, broken glass, molded fabric, and general garbage left by vagrants. They then scraped and scrubbed every inch of the theater to get rid of pigeon droppings, mold, and stains left by neglect and the building’s leaky roof. The seats needed reupholstered, the plumbing, sprinkler system, and wiring needed to be brought up to code, and the leaking roof needed repair. After the initial six months of gutting and cleaning the Holly, renovations lasted for another two years. Although renovations were still underway, the first event to be held at the Holly in almost a decade was the Star Search Finals in 1992. Marble from the same batch was purchased to replace broken pieces of the façade, the original 1948 lights were refurbished, the marquee, popcorn machine, and projectors were also salvaged and reclaimed. Then on November 6, 1993, the Holly reopened its doors with the concert, “Mountain Music Night”. Fundraising and renovations continued but the building was now functional. To provide income as assistance to the donations for renovations, the Holly Players were formed and presented two one-act plays, and a full-length production, Driving Miss Daisy, in 1994.

The Holly Theatre, originally built and opened as a cinema, became a thriving playhouse throughout the second half of the 1990s. With original shows by local playwright Tim Quigley, popular American musicals, and a thriving children’s theater, the Holly surpassed the expectations of the community and became an iconic landmark that offered locals and visitors the chance to experience highly talented local theater, along with the movie experience for which the theatre was first built. But in 2002, the theater seats needed to be replaced. After a large fundraising effort-with the donors etched in Holly history on the plaques located on the backs of seats-and another round of countless volunteer hours, the new seats were installed in September. Next came the much needed awning that covered the stairway leading to the downstairs theater and dressing rooms, with a new sign directing patrons toward that theater. A simple sign, reading “Stage Door”, was placed on the back door. The building stood proud again, a mix of modern touches and nostalgia.

The building became a second home to hundreds of volunteers who ran concessions, acted on stage, ran lights and sound, directed the plays, built sets, and became a family under the Holly’s roof. That roof, finally completely replaced in 2013, has seen Dahlonega change for over a half a century. It has provided a place of escape to thousands of visitors seeking the charm of a quaint 1940s style theater, and has become synonymous with Dahlonega culture. The building continues to house the Holly Theater Company and offers outstanding local theater rooted in its restoration. In [year], the Holly Theatre was added to the National Register of Historic Landmarks, cementing its place among local, regional, and national history and architecture.